We all contribute as best we can to build the world we live in and the members of the Canadian Space Society (CSS) are certainly no exception to this rule.

One of their major contributions to the fast approaching 65th International Astronautical Congress (IAC2014), which is being held in Toronto, Ontario from September 29th - October 3rd, 2014, will be a small tribute to the man who never missed an IAC congress ever, at least until his untimely death earlier this year. 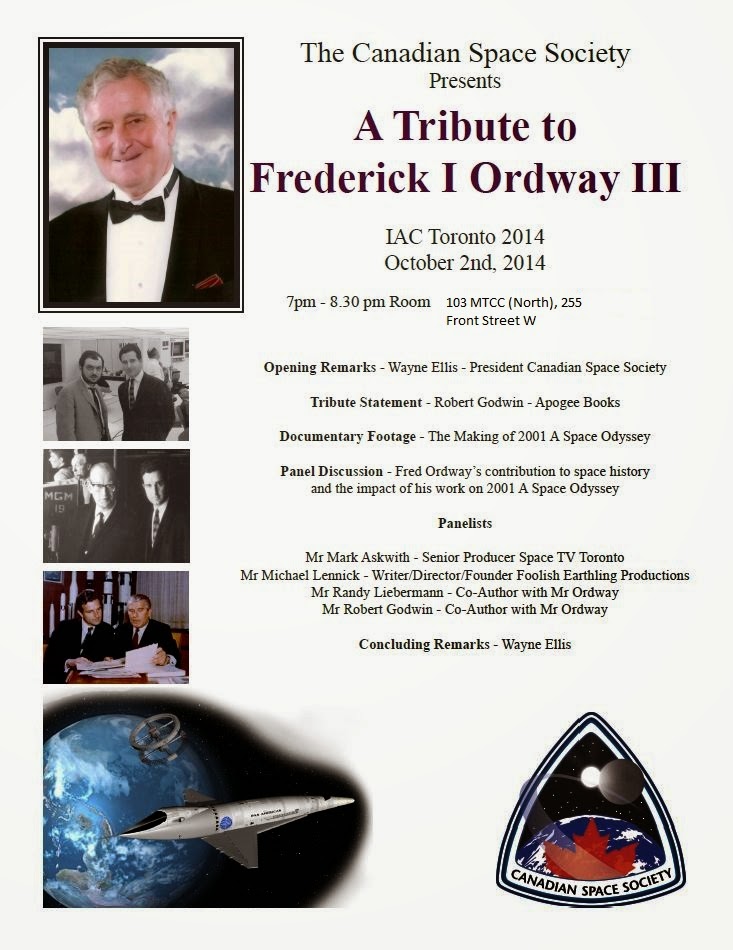 As outlined on his biography on the CG Publishing website, Frederick Ira Ordway, III (April 4th, 1927 – July 1st, 2014) was a prolific scientist and author of visionary works on spaceflight who often wrote in collaboration with the giants of the first great age of spaceflight.

They included Werner von Braun (his boss at NASA in 1965 when Ordway asked for a leave of absence to work with film director Stanley Kubrick on "2001: A Space Odyssey"), Ernst Stuhlinger (a German colleague of von Braun, also brought to America as part of the post World War II "Operation Paperclip") and Arthur C. Clarke, whom Ordway met in 1950 at the very first IAC congress in Paris, France.

The tribute will be held in the Metro Toronto Convention Centre (MTCC) room 103, north tower on October 2nd, and will begin at 7 pm.

Of course, that's not the only activity during IAC2014 to which the CSS will contribute.

According to CSS president Wayne Ellis, the CSS has also organized a meet and greet mixer on September 30th, 2014, for Canadians and members of the International Astronautical Federation (IAF) Space Societies Committee (SSC), which represents space societies, museums and professional associations throughout the world.

Current members of the SSC committee include Ellis, past CSS president Kevin Shortt and Planetary Society CEO Bill Nye (the science guy, who will also be part of a panel discussion on "The Canadian Space Program Today and Tomorrow," on October 1st, 2014 at the University of Toronto Hart House) plus quite a few others.

As well, the CSS will be hosting a space art exhibition from September 30th - October 3rd, 2014 to explore how space and its related technologies are being used to transform art and culture and inspire a new generation of innovators.

Titled "Revolutions: The Inexorable Evolution of Art" and representing the work of over fifty acclaimed artists, the presentation will feature a variety of art derived from space technologies, designed for micro-gravity environments or inspired by space developments. The exhibition has already been presented in Calgary and Ottawa to positive reviews and is expected to tour other Canadian cities in 2015.

The exhibition will be held in conjunction with "Canada's 50 Years in Space," a display developed in 2012 by the Canadian Embassy in Washington, DC and composed of images and memorabilia detailing Canada's exploits in space since 1962.


According to Ellis, there are also CSS members scheduled to present papers on a variety of topics at IAC 2014 along with a CSS booth, highlighting local space activities in the IAC Canadian pavilion for the duration of the event.

Just don't ask Ellis to slow down to explain everything about what's going on and where the events are located. It looks like he's already contributing the best he can.
Posted by Chuck Black