NASA and 3D printing pioneer Makerbot Industries have sponsored an online competition to harness the talents of the maker community to design a future Mars base.

The contest, called the MakerBot Mars Base Challenge, was created by Makerbot in collaboration with the NASA Jet Propulsion Laboratory (JPL) in California with the stated goal, as outlined on their website, of designing "a utilitarian Mars base that can withstand the elements and maybe even make you feel at home, despite being 140 million miles away from Earth, on average."

The public can upload their 3D design files to Makerbot's 3D design portal, Thingiverse (using the tag #MakerBotMars) between May 30th and June 12th. Entries will be judged by a panel of NASA-JPL and MakerBot employees on scientific feasibility, creativity, and print-ability. The 1st place winner will receive a MakerBot Replicator 2 desktop 3D printer and three spools of plastic filament. The 2nd place winner will receive two spools of plastic filament and 3rd place will receive one spool. All winners will have their designs featured on Thingiverse.


NASA is expecting that crowd-sourcing the Mars base design to non-scientists in the public will unearth new innovations as well as inspire the next generation of astronauts.

The Makerbot Mars Base Challenge continues the trend of the last few years of various government agencies soliciting the public for innovative new ideas that can foster new companies and products as well as be incorporated back into government programs.

Some of the more interesting designs submitted so far to the MakerBot Mars Base Challenge have included: 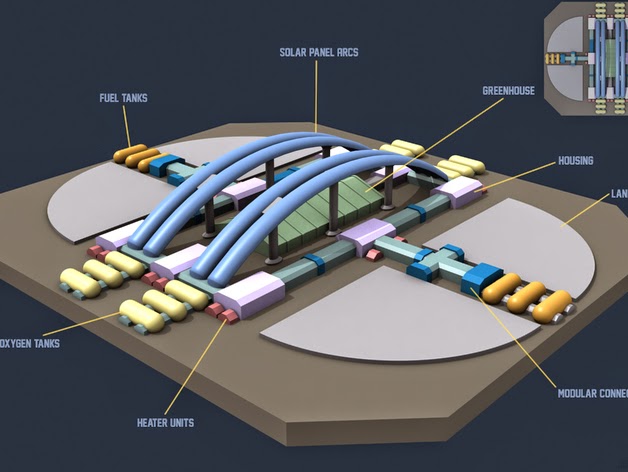 "The Sustainable Base," submitted by user "VFXBase." The base is circular and designed around a central area containing a greenhouse and a "roof" of arching solar panels. Forming a rectangle around the centre are modular tunnels which connect various housing units together. The outer "ring" of the base holds fuel and oxygen tanks, heating units, and four landing pads, which completes the circular design of the base and provides an easy way to land in and enter. The base was designed to be both visually striking as well as comfortable to live in. 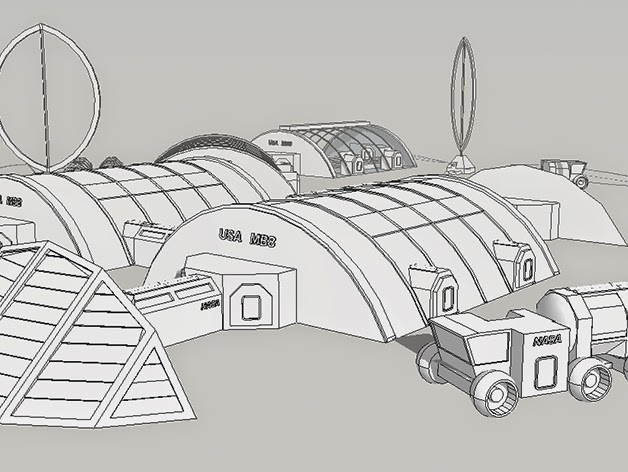 "The Mars Atmosphere Mine," submitted by user "NathansMind." In this design, the base uses a combination of both solar cells and wind turbines for power geeeration for the sake of redundancy. NathansMind argues that Martian dust storms would block out the sun for months at a time, making some form of backup power desirable. The base also incorporates absorption-based separators to harvest various gasses i.e. CO2 from the Martian atmosphere. Interestingly, NathansMind cites a variety of web links on gas separation, in-situ resource utilization, carbon monoxide fuel cells, and Mars polar wind turbines, which were consulted when developing thh design.

Brian Orlotti is a Toronto-based IT professional and a regular contributor to the Commercial Space blog.
Posted by Chuck Black