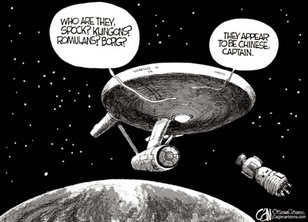 On Saturday, December 14th China’s Chang’e 3 lander and its Yutu rover touched down on the Moon. China, the third nation to visit the Moon after the US and USSR, is also the first to land a probe on its surface since 1976. Some chose to applaud this historic event and embrace it as an opportunity; others simply chose a smug silence.

The Chang’e (a Chinese Moon Goddess) series of missions form the core of China’s Lunar Exploration Program. Chang’e 3 was preceded by the Chang’e 1 and Chang’e 2 missions and lays the foundations for future sample return flights planned for 2017, culminating in manned missions.

Chang’e 3 centers around two pieces of hardware, a robotic lander (Chang’e 3) and a small lunar rover (named Yutu, or ‘Jade Rabbit’). The lander draws its power from a combination of solar panels and a radioisotope thermoelectric generator (RTG), sustaining the craft throughout its three-month mission. The Chang’e 3 lander carries four scientific instruments: the MastCam, the Descent Camera, the Lunar-based Ultraviolet Telescope (LUT) and the Extreme Ultraviolet Imager (EUV).

The 120-kilo Yutu rover, equipped with a solar panel to power it during the lunar day, will explore a three sq. km area (out of a maximum range of 10 km) around the landing site. Yutu carries four instruments: the PanCam; the Ground Penetrating Radar (GPR); the VIS/NIR Imaging Spectrometer (VNIS); and the Alpha Particle X-Ray Spectrometer (APXS). The PanCam will capture HD video and 3D images of the surrounding terrain and geological features as well as monitor the structural health of the lander. The GPR will measure lunar soil depth and the structural distribution of soil, magma, lava tubes and sub-surface rock layers. The VNIS and APXS will analyze soil samples scooped up by Yutu’s robotic arm for mineral/water content. The data gained from these various instruments will be essential to China’s future plans for harvesting lunar resources.

In Western mainstream media, reaction to China’s moon landing has been mostly indifferent. The landing was ignored by most US news sites and networks (though notably receiving a brief write-up on CNN.com) while receiving scant coverage on the BBC. Other public comments on many news sites often reflected either a “been there, done that” mentality, dismissed Chinese technology as vastly inferior, or degenerated into typically bigoted Internet diatribes.


Others have chosen a more far-sighted approach. The European Space Agency (ESA) has cooperative agreements in place with China that give it access to the data from the Chang’e missions. The ESA has also aided China by providing access to its network of ground stations for telemetry and data transfer to/from Chang’e 3 and intends to cooperate with China on future missions to the Moon. And, as outlined in the December 13th, 2013 Hyperbola article "UK Government commits £80 million for bilateral space cooperation with China and India" the UK government has even committed funding.

Those who argue that China is merely treading a path already walked by others (i.e. Lunar exploration) are missing a fundamental point; that no one else is currently walking this path. Other nations will observe China achieving its goals while the West continues to dither. China and those nations that partner with her will be the first to reap the benefits of lunar economic development.