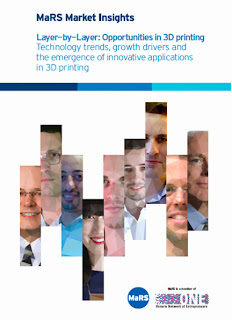 The MaRS Discovery District, a well known not-for-profit corporation founded in Toronto in 2000 to commercialize publicly funded medical research and other technologies, has finally weighed in on 3D printing, with a generally positive and useful report.

As outlined in the December 16th, 2013 blog post "Is 3D printing ushering in the third Industrial Revolution?" on the MaRS website, the new report, titled "Layer-by-Layer: Opportunities in 3D Printing" is an overview of how this technology is expected to affect manufacturing and various other industries in the near future.

The report focused on the aerospace, healthcare and consumer markets as being the industries most likely to provide new opportunities for 3D printing methodologies and predicted an average industry growth at around 12% annually over the next five years.

It even included interviews with seven Ontario-based companies involved with the development of 3D printing technology in a variety of areas including manufacturing prototyping, art, architecture and medical research.

However, the report failed to mention the automobile industry, one of the largest current users of the technology (for prototyping) or the fast growing Canadian hackerlab movement with organizations like the Interaccess Electronic Media Arts Centre, the Kwartzlab Makerspace, the Makerkids non-profit workshop space for kids, Think|Haus, the Site 3 coLaboratory, UnLab and others currently utilizing 3D technology in a variety of innovative ways.

But while the effects of 3D technologies on the aerospace and space industry have been noted in a variety of recent posts including the December 12th, 2012 post "3D Printers, Additive Manufacturing, Aston Martins & Star Trek Replicators," the August 26th, 2013 post "3D Printing in Space Now With Holographic Controls" and the October 22nd, 2013 post "3D Metal Manufacturing Waiting for Patents to Expire," its good to see many of the concepts finally validated through the official Canadian eyes of one of our best known entrepreneurial ecosystems.

We too often come to these sorts of parties grudgingly and too late to do any more than simply look on as the winners collect their spoils. Perhaps this time will be different.
Posted by Chuck Black