The State of the US Government Space Program

Here's a quick heads up for Canadians hoping that our biggest space partner, the National Aeronautics and Space Administration (NASA) is going to get it's budgetary act together anytime soon.

The latest proposed Obama Administration FY2012 budget is simply the most recent stage of a very long and drawn out process that is officially scheduled for completion sometime before October 2011, when the next FY is scheduled to begin.

Of course, the Americans haven't even approved last years budget yet so NASA is operating under continuing resolution HR 3082 (passed by the US House of Representatives on Dec. 21, 2010) which mandates NASA spending rates proportional to the $18.72 billion appropriated for all of 2010, according to the December 22nd, 2010 Space News article "Obama Signs Short-term Funding Bill."

This means that all those wonderful new initiatives and changes promised last year at about this time by the Obama Administration are officially still on the drawing board.

NASA is prohibited from initiating new programs and continues funding the very same Constellation program Obama tried to abandon in his last NASA budget, the $19 billion budget blueprint for 2011 that was sent to US lawmakers back in February 2010. According to the February 14th, 2011 Tallahassee.com article "NASA budget freeze slows rocket development" the existing NASA budget would be frozen "for the forseeable future" under the new fiscal 2012 spending blueprint released today and the freeze "would mean slower rocket development, which is expected to anger members of Congress." 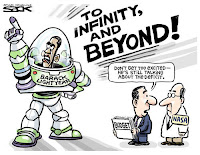 Of course, the real reasons for the current US budget woes have little to do with NASA or angry congressional representatives and everything to do with "a $3.7 trillion budget that projects the federal deficit will exceed $1 trillion for the fourth consecutive year in 2012 before falling to more "sustainable" levels by the middle of the decade" according to the February 13th, 2011 Bloomberg report "Obama's $3.7 Trillion Budget Sets Fight in Congress."

So the NASA budget is really just a sideshow, and everything actually depends on the US government being able to wrestle the larger budget deficit under some sort of control.

It's therefore fortunate that real changes are occurring among the up and coming commercial space providers. For example, according to the February 14th, 2011 Satellite Spotlight article titled "NASA's Commercial Space Revolution:"


Last week, NASA Chief Administrator Charles Bolden told attendees at an FAA Commercial Space Transportation Conference that "We need you, we cannot survive without you." The week before, NASA Deputy Administrator Lori Garver swept through Las Vegas to highlight a discussion with Bigelow Aerospace to launch an inflatable module to expand the International Space Station (ISS), then went to Boulder, Colo., to tour Sierra Nevada's facilities and get a photo op in front of the company's Dream Chaser spaceplane mockup.

NASA is supporting these new-space commercial providers because they no longer see any way to move forward without them and this might indeed be the correct assessment of the situation. Bigelow, Sierra Nevada, Space-X and the others of their ilk require far less up front funding to develop usable hardware.

For example, it's worth noting that all the money Space-X has received so far under various NASA funded commercial crew development (CCDev) programs have funded to completion two perfectly useful and functioning rocket systems (Falcon-1 and Falcon-9) at one thirtieth the cost spent on the NASA developed Ares rocket, which has a new name ("Liberty") and a new second stage (from the European company EADS Astrium), but is still not quite finished yet.

After all, that trillion dollar a year federal deficit is quite the hole to dig out from under.The US government has a lot of work to do in that area, before it can reasonably begin to focus again on science, technology, space or even health care reform.

Here is a recently released video summarizes the evolving US consensus on where space exploration is at this particular moment in time.

Both Bolden and Garver seem to have staked their professional careers on this new approach and seem to be developing allies and associates throughout industry.

Good luck to them.

Canadian scientists, space agency employees and consultants might want to take note of this emerging US consensus and begin planning, adapting and modifying future Canadian space plans accordingly. We can no longer make assumptions regarding the long term viability and direction of the US space program without taking these new players with their own independent funding and ways of looking at the world into account.

Otherwise, it's good luck to us.
Posted by Chuck Black