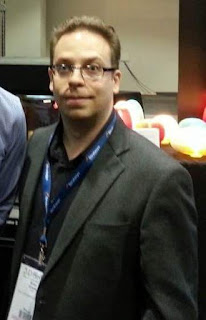 I'm an IT guy, writer and space advocate.

During the day,I'm  a network operator at the Ontario Research and Innovation Optical Network (ORION), a not-for-profit network service provider to the education and research sectors and write/edit the monthly Orions Belt newsletter.

I graduated from Ryerson University with my BAA in Administration and Information Management in 2006. Over the past seven years, I've held various IT positions in the banking, financial services and Internet sectors.

Space fascinated me from an early age and this fascination led me into space advocacy. From 2000 to 2003 I was a member of the Mars Society of Canada (MSC).

During my time in MSC, I was involved in local outreach activities, helped organize the 2000 Mars Society Conference, did backroom support work for the Flashline Mars Arctic Research Station (FMARS) and was part of MSC's 2003 Expedition One research team at the Mars Desert Research Station (MDRS).

After a seven year hiatus to focus on my IT career, I returned to space advocacy in 2010. I was Director of Social Media for the OpenLuna Foundation until March of 2013.

In 2012, I briefly worked as a writer for 'The Star Spot' podcast. In the same year, I joined the Canadian Space Commerce Association (CSCA), performing fundraising work and helping to organize both their 2013 and 2014 CSCA National Conferences and served as their treasurer.

Writing for the Commercial Space blog lets me combine my twin passions for space and technology in a wonderfully creative way.

Samples of my work include the October 25th, 2015 post on "What About all those Cheap Rockets and Spacecraft?" and the September 16th, 2015 post, "Meanwhile, Back in the Real World: Seasoned Entrepreneurs are Jockeying for Position in the Fast Growing NewSpace Economy."

I've also contributed to other publications, most recently the Spring 2018 Rehab and Community Care Medicine article, "Digital humanitarians on Earth and among the stars."


I'm fascinated with the changes happening right now all around the world and look forward to chronicling a new era of human endeavour.