(Mostly) Canadian Government Departments of Interest to the Space Industry

Of course, Canada spent the first thirty years of our current space age without a national space agency.

Some of our best work, including the Black Brant suborbital sounding rockets, the Alouette satellite, Telesat opening up communications in the far north, the preliminary work on the first Radarsat, the original Canadarm development and even the early days of the Canadian astronaut program, were all projects developed before the CSA came into existence in 1990.

Besides, the 2012 David Emerson led Aerospace Review had some seriously damaging things to say about CSA fiscal prudence during the RADARSAT Constellation program, which is certainly part of the reason why CSA hasn't been given a large program to administer since Emerson was released.

So the CSA isn't the only game in town for those looking for government support to work in the space industry. Here's a representative sampling of a dozen of the more notable and useful options.

The Canadian Commercial Corporation (CCC) - Established in 1946, the CCC is a federal Crown corporation mandated to promote and facilitate international trade on behalf of Canadian industry (particularly within government markets).


This is quite useful since Canadian space firms typically sell half or more of their products on the international market.

The Canadian Foundation for Innovation (CFI) - Set up by the Federal government in 1997 to build Canada’s capacity to undertake world-class research and technology development.


The mandate of this government organization is to help users find and access programs and services provided by all those other government departments, which bureaucrats believe to be less effective at answering the phone and replying to the e-mails of those looking to learn more.

As per the 2012 Federal Review of Aerospace and Space Programs and Policies (or "Emerson Report"), the CSA acts "as a technical supervisor" in supporting specific committees, supports the Minister of Public Works in negotiating "co-operative agreements with other countries' space agencies," co-manages space technology development (along with the National Research Council), conducts its own research, operates its existing satellite inventory and maintains the Canadian astronaut program.

The CSA, and Canadian space activities in general, were most recently reviewed by the Federal government appointed Space Advisory Board (SAB), mandated to help "support the development of a new vision for Canada's space sector."

The SAB report, released on August 17th, 2017 under the title, "Consultations on Canada’s Future in Space: What We Heard," was almost immediately dismissed by the Federal government. Eventually, and as outlined in the March 8th, 2018 post, "Space Advisory Board Chair Admits Disappointment over Budget but Promises to Continue to Support Space Sector," even the head of the SAB expressed public "disappointment" over this response.

For more on the expected next steps, it's worth checking out the March 22th, 2018 post, "What Happens After the Failure of the Space Advisory Board?"

CSA programs are often funded only partially through the CSA, and depend on funds from other areas, such the National Research Council (NRC), the Natural Sciences and Engineering Research Council of Canada (NSERC), other government departments, academic institutions and the private sector, to top-up their funding requirements.

And sometimes, as outlined most recently in the February 28th, 2018 post, ""Big Winners" in Tuesday's Federal Budget," funding for space focused programs doesn't necessarily even need to go through the CSA.

The current president of the CSA is Sylvain Laporte, who spends at least some of his time privately advocating to protect the CSA's turf from other Federal government departments, and reports directly to Minister of Innovation, Science and Economic Development (ISED), Navdeep Bains.

It's worth noting that, if there is an important and photogenic CSA announcement to be made to the Canadian public, Minister Bains is usually front and center to make it, not president Laporte.

The Department of National Defence (DND) - Home of the Canadian Armed Forces and a variety of other sub-groups and departments, some of which directly relate to space activities and some of which relate more to space assets being used for military command, control and communications (C3) functions.


For innovators, it's well worth checking out the the $1.6Bln CDN Innovation for Defence Excellence and Security (IDEeS) program, which included funding opportunities for the private sector in the space domain.

For an overview of who the DND perceives of Canadian military space operations, it's worth checking out the Winter 2015 Royal Canadian Air Force (RCAF) Journal post, "Integrating Space into Canadian Armed Forces Operations."

It's also worth noting that, according to the article, the "USAF has primacy in the space domain for the American military forces," and the Canadian role is mostly to support the US. From a practical perspective, this often means that the Canadian military often purchases services from US military providers, instead of building their own assets.

For a recent overview of the Canadian defence industry, check out the May 25th, 2016 Canada Defence Review article on the "Critical Impact of Canada's Defence Industry on Economy."

For an overview of the current DND procurement requirements, plus an assessment of the increasing importance of government off-set credits, job creation expectations and economic development requirements in overall Federal government procurement policy, it's worth taking a look at the May 28th, 2015 IHS Janes 360 article, "Canadian defence industry overview [CAN2015D2]."

In July, 2016, as outlined in the November 16th, 2016 Canadian government "Defence Policy Review" website, the DND concluded "an unprecedented public consultation in support of the development of a new defence policy for Canada." The results of that review, are slowly working their way through the Canadian military.


Nearly all precise positioning in Canada relies on NRCAN services at some level because of the massive opportunities to drive innovation and efficiencies in the broad national economy. For an overview of these potential efficiencies, check out the March 2011 Royal Academy of Engineering paper on "Global Navigation Space Systems: Reliance and Vulnerabilities." 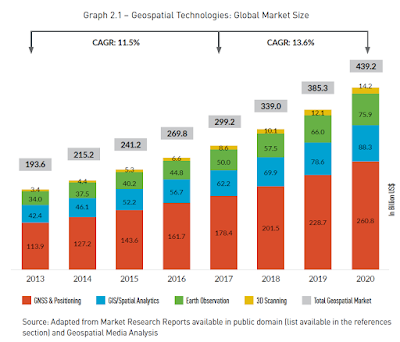 The act is reviewed every five years and was most recently critiqued by the 2017 Independent Review of the Remote Sensing Space Systems Act, written by associate professor Ram S. Jakhu and research assistant Aram Daniel Kerkonian from the Institute of Air and Space Law at McGill University.

As outlined in the April 20th, 2017 SpaceQ post, "A Review of Canada’s Remote Sensing Law Recommends Creating a New General Outer Space Act." the McGill review found that the original act had fallen behind "the pace of technological change" and recommended the creation of a new "Outer Space Act" able to balance commercial interests with national security needs.

Export Development Canada (EDC) - Canada's export credit agency, this crown corporation works with the CCC and other government agencies to offer up "innovative financing packages" to those looking to expand their international business.


In 2013, EDC claimed over $5Bln CDN in support to the Canadian aerospace sector, mostly in the form of financing and alternative financing solutions, accounts receivable insurance and bonds to ensure supplier obligations.

The agency also maintains and manages the ExportWise website, which contains timely articles on export opportunities, analyses of key markets and emerging opportunities, how-to guides and profiles of successful exporters.

These policies enjoy wide bipartisan support among Canadian political parties and were reviewed/ updated by the 2012 Federal Review of Aerospace and Space Programs and Policies (or "Emerson Report," presented to then Industry Minister Christian Paradis in November 2012) and the Review of Federal Support to Research and Development (or "Jenkins panel," which was presented to then Minister of State Gary Goodyear in October 2011).

More recently, Canada's Fundamental Science Review, also known as the "Naylor Report" was presented to to the Government of Canada on April 10th 2017. As outlined most recently in the April 28th, 2018 University of Toronto News post, "David Naylor upbeat about research funding in Canada, gives kudos to students and researchers for #SupportTheReport," the report led to a substantial increase in Canadian government funding for basic science.

ISED is also the lead agency administering "Canada's New Superclusters," a Federal government program providing up to $950Mln CDN to each of five consortium's composed of business and academic partners, which will be matched dollar for dollar by the private sector, and is expected to create more than 50,000 jobs over ten years and grow Canada's GDP.

The NRC reports to Innovation, Science and Economic Development Canada (IC), which, as outlined above, focuses Canadian spending in this area around questions of commercialization and (sometimes) basic research.

NRC is also home to the Build in Canada Innovation Program, designed to help innovators:

The Ontario Centres of Excellence (OCE) - A collaborative network of organizations across Ontario designed to help entrepreneurs, businesses and researchers commercialize their ideas.

Collaborative organizations include the Business Development Bank of Canada (BDC), the Centre for Commercialization of Research (CCR), OMERS Ventures, the Ontario Aerospace Council (OAC), the Ontario Network of Entrepreneurs (ONE), the Network of Angel Organizations - Ontario (which administrators the Ontario Angel Network Program) and quite a few others.

Many Canadian space companies (and even a few academic institutions) receive funding through the OCE or through organizations affiliated with it.

The United States Office of Space Commerce – Only in Canada would it be possible to suggest that one of the best places to find information on government space policies and initiatives would be a foreign government website.


But in an age focused on the US International Traffic in Arms Regulations (ITAR) and its Canadian equivalent, the Controlled Goods Program (CGP), this site provides great background material from the US Department of Commerce relating to commercial space activities, general policy information affecting all areas of commercial space activities, including presidential announcements, information on doing business with the US government, information on the US space industrial base and primary documentation relating to satellite export controls.

According to the website, the office "is the principal unit for space commerce policy activities within the Department of Commerce. Its mission is to foster the conditions for the economic growth and technological advancement of the US commercial space industry." The department serves as the "lead civil agency" for civilian space policy.

Highly recommended for space geeks and business entrepreneurs looking to sell into, but not necessarily live in, the highly lucrative US market.