For the week of February 6th, 2017, here are a few of the stories we're currently tracking in the Commercial Space blog:

As outlined in the February 7th, 2017 UrtheCast press release, "GEOSYS Becomes Anchor Customer of UrtheDaily Constellation,"  Land O' Lakes, Inc., a member-owned agricultural cooperative based in the Minneapolis-St. Paul suburb of Arden Hills, has announced a long-term agreement for GEOSYS, a Land O'Lakes subsidiary which provides satellite imagery to farmers, to purchase geospatial data from the UrtheDaily Constellation.

As outlined in the press release, "GEOSYS will become an anchor customer for the UrtheDaily Constellation.  GEOSYS, already the UrtheCast group's largest agricultural customer and one of the world's leading providers of digital agriculture solutions, will use the data to improve the decision-making processes for their customers globally, including WinField United, the Land O'Lakes crop input business."

No dollar amount was noted in the press release.

As outlined in the February 6th, 2016 Space Angels Network post, "Private-Public Partnerships, NASA, and the Tipping Point of the Entrepreneurial Space Industry," private, public partnerships (PPP) between NASA and various space companies like SpaceX who provide services, "has been instrumental in the development of the Entrepreneurial Space Age. As the space industry begins the year with its eyes on the prize (so to speak), PPPs will be crucial to further critical R&D and to facilitate practical implementation of emerging technologies."

The article also noted that space industry has developed "a proven track record" of successful PPP's and plans to use them to fund and develop various "tipping-point technologies."

It's also worth noting that telecommunications was considered a "tipping point technology." when Telesat Canada, now the fourth-largest fixed satellite services provider in the world, started out in 1969 as a Canadian crown corporation created as a public private partnership to provide telecom access in the far north.

As outlined in the February 3rd, 2017 Space Intel Report post, "Most geo satellites retired in 2015 violated orbit-debris guidelines,"the claim was made during a presentation to the United Nations Committee on the Peaceful Uses of Outer Space (COPUOS) Inter-Agency Space Debris Coordination Committee (IADC) meeting on February 1st, 2017.

The expected increased compliance by operators of small satellites in low orbit should be showing up in the annual data, but isn't.

According to the article, "unlike geostationary-orbit satellites, which are usually large and expensive, satellites in low orbit have a wide variety of owners, especially as the cost of building and launching a satellite weighing just a few kilograms has come down in recent years."

As outlined in the February 2nd, 2017 Wall Street Journal article, "Congressional Investigators Warn of SpaceX Rocket Defects," a preliminary report from a Government Accountability Office investigation has found "persistent cracking of vital propulsion-system components, according to government and industry officials familiar with the details."

The article quotes "unnamed sources" and "preliminary findings" from the US Government Accountability Office (GAO) which "reveal a pattern of problems with turbine blades that pump fuel into rocket engines, these officials said. The final GAO report, scheduled to be released in coming weeks, is slated to be the first public identification of one of the most serious defects affecting Falcon 9 rockets."

The crack-prone parts are considered a "potentially major threat to rocket safety," according to the "industry officials," and may require redesign of what are commonly called the Falcon-9’s "turbopumps."

According to the article, "industry officials have known about problems with cracked blades on Falcon 9 versions for many months or even years. But cracks continued to be found during tests as recently as September 2016, Robert Lightfoot, NASA’s acting administrator, confirmed in an interview with The Wall Street Journal earlier this week."

As outlined in the February 6th, 2017 Reuters post, "Exclusive: SpaceX to hit fastest launch pace with new Florida site,"  SpaceX has said that it will be modifying the rocket's engines to increase performance and resolve potential safety concerns. 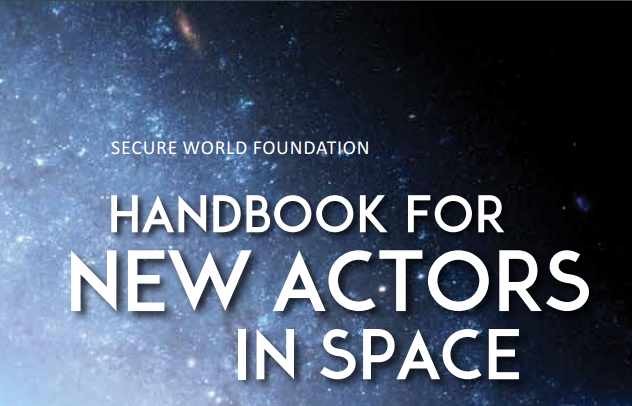 As outlined in the January 30th, 2017 press release, "SWF Releases the Handbook for New Actors in Space," the goal of the handbook is to "provide both governmental and non-governmental actors coming into the space domain with a broad overview of the fundamental principles, laws, norms, and best practices for peaceful, safe, and responsible activities in space."

It includes overviews of "The International Framework for Space Activities," a section on "National Space Policy and Administration" and a section on "Responsible Operations in Space," which covers pre-launch and launch requirements, on-orbit requirements and end-of-life restrictions.

For more, check out future posts in the Commercial Space blog.