San Francisco, California based SSL MDA Holdings, the current official name for what was once Richmond, BC based MacDonald Dettwiler (MDA), seems able to continue winning substantial contracts from the Canadian government despite the recent reorganization designed to establish its US pedigree. 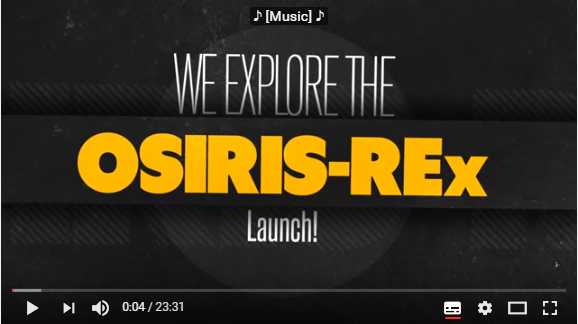 Those efforts were outlined in the October 3rd, 2016 post, "Iconic MacDonald Dettwiler is Now SSL MDA Holdings, a US Based Company with a Canadian Subsidiary" and the earlier story seems to be having at least some effect on the Canadian government.

At the very least, they seems to be getting a little shy about promoting any new MDA contracts.

An example of this would be the lack of any formal Canadian government announcement surrounding the awarding of a $4.2Mln CDN contract from the Canadian Space Agency (CSA) to MDA, now mostly the SSL MDA Canadian subsidiary, for additional training items relating to Canada's contribution to the origins, spectral interpretation, resource identification, security, regolith explorer (OSIRIS-REx) mission.

OSIRIS-REx is a NASA sample mission launched on September 8th, 2016 to study asteroid 101955 Bennu, and return a sample of the asteroid to Earth for detailed analysis. The details of the CSA contract awarded is available on the Federal government Buyandsell.gc.ca website under the title, "Spacecraft Instrumentation Development (R&D) (9F052-150828/001/MTB)."

As outlined in the January 6th, 2016 SpaceQ post, "MDA Gets Training and Operations Contract for OSIRIS-REx and SSL Subsidiary Gets NASA Discovery Mission Project," the additional funds were intended to cover, "the provision of training sessions on the OLA (OSIRIS-REx Laser Altimeter) instrument, operations support as Instrument Engineer(s) (IEs), and engineering support for the OLA operations during Cruise and Asteroid Encounter Operations."

No doubt these were all standard training and support items which no one had thought much about before the satellite launched.

The SpaceQ article also noted the lack of any issued press release or publicity for the award. That lack of publicity might also be perfectly understandable as a simple oversight which will be rectified soon.


Editors Note: Things seem to have reconciled themselves.

As outlined in the January 18th, 2017 press release, "MDA provides operational support to Asteroid Mission," MDA has issued a public statement that "it has received a contract for CA$3.7 million from the Canadian Space Agency (CSA) for NASA's OSIRIS-REx mission. MDA will provide operations engineering support for the CSA's contribution to the mission, the OSIRIS-REx Laser Altimeter (OLA) instrument, which will provide ranging and topographic data of the asteroid Bennu."

The difference between the $3.7Mln CDN award announced in the January 17th, 2017 press release and the $4.2Mln CDN as announced on the BuyandSell website previously can easily be attributed to the 13% Canadian harmonized sales tax, which CSA contracts often include and public press releases mostly don't.

As outlined in the press release, "This latest contract demonstrates MDA's continued involvement as a leading Canadian supplier to CSA of space exploration instruments for joint US-Canada missions."

Meanwhile, back in the US, another MDA SSL subsidiary received an award for a NASA discovery mission and the Americans were eager to promote it.

As outlined in the January 6th, 2017 Space System Loral (SSL) press release, "SSL To Provide Spacecraft for NASA Asteroid Exploration Mission," the award will "provide a spacecraft platform for a NASA Discovery Mission to explore the metallic asteroid 16 Psyche," and utilize the SSL 1300 series satellite platform, "which has been proven on more than 100 missions."

According to the January 5th, 2017 MDA press release, "MDA's U.S. business unit, SSL, to provide spacecraft for NASA asteroid exploration mission," the contract "is expected to exceed $75Mln USD (approximately $100Mln CDN), and represents the second major US government project for the company in recent months, demonstrating growing momentum in this sector."

According to the press release:


"We are very pleased to be able to serve NASA and the U.S. government on an increasing number of missions," said Howard Lance, chief executive officer of SSL MDA Holdings.

"SSL brings a depth of resources and experience to scientific missions such as the exploration of 16 Psyche and we are committed to demonstrating how we can deliver innovative solutions to U.S. civilian, defense and intelligence agencies going forward.

Given the size of the recent contracts awarded and the accompanying publicity attached to each specific award, only one thing seems clear.

While the old MDA was the go-to single source company for large, distinctly Canadian space projects such as the iconic Canadarm and the various RADARSAT's, the new SSL MDA is finding it more profitable to focus on the American market.