Shoot the Moon: An ICBM Crashportation "Bridge to Nowhere" to Help Start a Moon Village

The president of Orbital ATK's flight systems group, which operates the Minotaur family of ICBM-based launch vehicles and the CEO of Virgin Galactic have crossed swords (or maybe plowshares) over the most recent variation of a very old idea; the hauling of old ICBM components out of retirement to be put to more peaceful uses.

But Whitesides has a pecuniary interest of his own. Virgin Galactic not only offers perpetually delayed suborbital fun-rides, but has also begun a small satellite launch initiative of its own, one that might even orbit a satellite before anything very recreational happens elsewhere in the company.

Whitesides' complaint is understandable: there could be a "crowding out" of private sector initiatives.


Perhaps it's my trollish nature, but I'd like to see what I can do to antagonize both sides of this debate.

First, however, let me go back to an old ruckus that bid fair to burst at the seams with political venom back in 2008: the uproar over U.S. congressional "earmarks." Many projects that enjoyed "earmark" funding promises at that time were derided as "bridges to nowhere."

Since 2008 was also the year of Sarah Palin's vice-presidential candidacy, and since Alaska had two bridges to nowhere earmarks of its own, I found myself studying bridge projects. I did this in (frankly partisan) hopes of finding some awful embarrassment for Palin. In a way, I was disappointed: neither Alaskan bridge proposal was as ridiculous as it seemed at first. In fact ...

One of these Alaskan bridges would have connected a (low-volume) international airport to a small town nearby. It probably would have improved the local economy by getting more tourists who were bound for Misty Fjords National Monument to stay longer, at a slightly more developed way-station. The other bridge would have connected Anchorage to a relatively undeveloped subdivision across a river that was served by a ferry only when winter ice didn't make the transit too difficult. It might have sparked a construction boom across the water from downtown.

But it gets better. With the kind of low-interest financing that tends to be more available when the US Federal Reserve targets the lower bound of interest rates in a recession, it seemed possible that these bridges had a kind of business case. That is, they could eventually have been revenue-positive for their respective municipalities. Coincident with the Fed targeting the lower bound is the economic predicament that justifies such low interest rates in the first place: high unemployment in a recession. Later in 2008, the global economy imploded. Suddenly, certain Bridges to Nowhere looked a lot like "shovel-ready projects."


Bridge projects are infrastructure. Stimulus spending tends to be oriented toward infrastructure because it's most often "shovel-ready" when a recession hits. Infrastructure investment doesn't cause much private sector "crowding out" -- because it's not something the private sector directly invests in. It's a "public good:" few users directly pay the carrying costs, but if the project is chosen wisely, the economy as a whole tends to benefit for a long time to come.

Getting back to space launcher plowshares: to be honest, I think George Whitesides is pretty close to correct. Even though a private-sector entity that uses freebie ICBM motors is still in the private sector, those freebies could mean there's effectively been some crowding out done with a past public investment.

But Scott Lehr also has an excellent point about how private sector space launch initiatives in the U.S. are not on a very level international playing field to begin with.

Against this background of two launcher company executives facing off, I see ... the Moon. Remember the Moon?

The FAA's arm for regulating commercial spaceflight has responded enthusiastically to the current ESA director's proposal to put a base on the moon as outlined in the May 1st, 2015 Space.com post, "Europe's Next Space Chief Wants a Moon Colony on the Lunar Far Side," and has done so with possibly more enthusiasm than any government entity in the EU.

Well, there's another book being talked here, isn't there? In this case, it's a government book. The FAA's new arm for for overseeing commercial spaceflight would prefer to have more US based spaceflight to oversee. And if those launches are mostly for ESA and for any Moon Village partners that happen to materialize, well, it's still spaceflight, potentially by American launch providers, launches that could still take place within FAA purview.

Let's look at the bright side of all this self-serving talk. Government can sometimes take an economic "pump-priming" role, shoes that the private sector won't fill on its own. Government is perhaps at its best when it steers private interests toward public good in ways that also help those private interests. (Did I mention I'm running for chairman of the local Chamber of Commerce? No? Well, anyway....)

What I propose is to crash a lot of retreaded, unladen ICBMs wherever the ESA says they'd like their Moon village.

Since these vehicles would arrive at speeds in excess of 2 km/sec, the vehicle wreckage would be quite fragmentary, to be sure. But the detritus would consist largely of pure metal pieces.

When you consider the costs that would need to be sunk to mine and refine metals on the moon, starting from bare regolith, these rocket chunks would have great value. Compared to anything you could scoop up on the moon today, they would have enormous value added.

A big plain strewn with pure metal on the moon could give the Moon village a major initial boost to in-situ resource utilization (ISRU). Even in the meantime, metal 3D printers could use collected shrapnel as feedstock. The sooner a Moon Village can scale up, the more opportunities that launch providers -- including American providers -- would see to serve a growing village.


Well, let politicking begin. Surely, the U.S. should crash this "bridge to nowhere" on the Moon only with "international earmarks;" that is, it should make sure Moon Village partners only "mine" the crashed metals if they bought them at some market rate.

The proceeds from the sales could be paid into an account that could be drawn upon by Moon Village partners only to buy launch services from American commercial providers. (Perhaps our Sam Dinkin would like to do the metals auction design?) 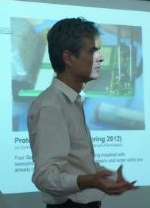 I'm not sure whether I've antagonized both sides of this debate enough. My hope is far more vaulting, actually. It's to antagonize sides of the debate I haven't even heard of yet.

This is ambitious of me, I suppose.

Michael Turner is the executive director of Project Persephone, a Japanese based society founded with the goal of bringing space development to the masses. He lives in Tokyo.