Growing or Shrinking the CSA: How and Why the Emerson Space Working Group Report Differs from Volume Two of the Final Emerson Aerospace Review.

While it's a good thing that the space industry has climbed far enough up the news cycle to receive coverage during the current federal election, it might be premature to expect any reasoned or in-depth coverage, especially in the "mass" media, without some additional context.


The first part of this series, under the title "While All Can Contribute, Not Everyone Will Get into the Final Report," discussed the 2012 David Emerson led aerospace review, the most recent federal government review of the Canadian Space Agency (CSA) and the industry originally set up to support and service it.

It was the largest review ever conducted, and was designed to allow "all the stakeholders in Canada" to have a voice in the future direction of the industry. It was surprisingly successful, although not every stakeholder had their recommendations included within the final report.

This was mostly because, by 2012 those stakeholders had become a large, powerful and disparate group, at least when compared to the CSA, a single moderately sized government agency set up to manage and fund the projects those stakeholders were supposedly bidding on.

According to the Space Economy at a Glance 2014, which covered the 2012 period:


Canada has a well-developed space industry, including about 200 private companies, in addition to research institutions and universities, some of which have some commercial activities.

In essence, by 2012, Canadian space revenues were almost ten times larger than the $363.2Mln CDN CSA estimated budget for the same year. This made it very difficult for the CSA to dictate industry policy or manage and fund enough programs to maintain the CSA as a key partner to the industry.


And most were no longer interested in surviving solely on Canadian government contracts. They were instead concerned about expanding into new markets, which is the typical concern of fast growing, private sector firms. As outlined in the 2012 CSA "State of the Canadian Space Sector," report, "the majority (80%) of space sector revenues in 2012 were derived from private (non-governmental) sources."


At least one industry player, Richmond BC based MacDonald Dettwiler (MDA), the prime contractor for both the renowned Canadarm program and the various RADARSAT satellites, was beginning to think it could no longer rely on CSA and Canadian government contracts to grow the company.

This wasn't always the case. As outlined in the April 17th, 2015 post on "100 Years of Aerospace History in Canada: From McCurdy to Hadfield; The REAL Story Behind RADARSAT, COM DEV and MDA," as recently as 2008, MDA was "being allocated almost half of the CSA budget, with contracts worth $430Mln CDN."

However, by 2012, a shrinking CSA list of funded projects, as compared to the greatly expanded MDA list of clients, acquired in part through the $875Mln CDN purchase of Palo Alto, California, based Space Systems Loral (SSL) in June 2012, had built MDA into a $2Bln CDN per annum powerhouse which couldn't be supported (or even much influenced) by the relatively tiny contracts the CSA could reasonably provide.

The CSA either needed to find more funding (a lot more) or else step out of the way and officially cede its role as policy maker, manager and funding agent.

The Emerson report on the space industry, "Volume 2: Reaching Higher Canada's Interests and Future in Space," argued for the CSA to cede its role.

As outlined in the December 5th, 2012 post, "What the Space Volume of the Aerospace Review Actually Says," the final Emerson recommendations included: 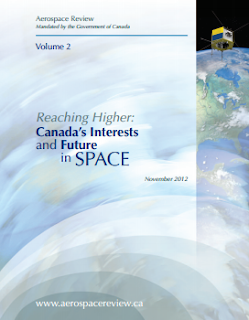 There was one exception to the overall thrust of the final report.

In conjunction with the reduced role and new oversight, the report recommended the stabilization of "overall CSA funding" and the expansion of funding for programs which supported the development of space technologies "for the enhancement of industrial capabilities," such as the CSA Space Technology Development Program (STDP), by an additional $10Mln CDN per year over each of the next three years.

In essence, Emerson assumed that the CSA's best role would be the judicious cultivation of small companies attempting to commercialize CSA derived innovations. The big companies like MDA, who traditionally partnered with the space agency, were reaching the critical mass necessary to take care of themselves.


But the Emerson Space Working Group Report, one of six subsidiary working groups set up by Emerson to "provide information and advice on key issues," didn't want to shrink the CSA. Under the leadership of MDA senior executive David M. Caddy (who evidently remembered the "happy times" when much of the CSA budget funded his employer), the Space Working Group advocated the opposite.

They called it "capacity building," the development of a large scale domestic infrastructure funded by government and funneled into traditional space agency partners (like MDA), in order to fund future "space opportunities" of "strategic importance." Their recommendations included: 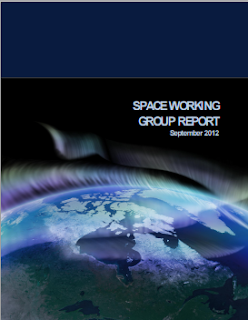 These points are the key to understanding where the Space Working Group differs from Volume Two of the 2012 Emerson Aerospace Review. Given the high growth rate in the industry (just under 10% a year) an activist strategy focused on maintaining the traditional role of the CSA could only be achieved with a substantial increase in the CSA budget and a focus on large scale projects.


Of course, the Space Working Group Report conclusions were picked over by Emerson and mostly subordinated into Volume 2 of the final Emerson report.

This was because, while all involved accepted the validity of planning for future projects like PCW, the incumbent Conservatives under Prime Minister Stephen Harper preferred to fund programs of this nature outside of the CSA "core" operational budget, which made it easier to track and postpone (if necessary), and which also bypassed any questions related to CSA procurement capabilities, which both the final Emerson Report and the Space Working Group Report had noted were in need of improvement.

Capacity building also added a premium to costs, since infrastructure would be built over time and funded even when it wasn't needed.

But Harper did at least attempt to implement the overall Emerson recommendations, putting into place the requested additional layers of committees as outlined in the February 2nd, 2014 post "Conservatives Form Committees; NDP Says 'Incompetence Crippling Space Sector!'" As outlined in the follow-up February 3rd, 2014 post, "Will Canada Support the Growth of Small "NewSpace" Companies?" the Harper government even provided additional funding for the STDP, although not to the level recommended by Emerson.


But that wasn't enough for the NDP and the Liberals, who've been sniping at Emerson, each other and the Conservatives ever since.