The possibility of a third contestant in the Space Race, in the form of a Commonwealth space program hinged on the sharing of technology and financing amongst the various invested nations, but more significantly on the political choices made regarding the future defensive postures of Canada, the United States and the United Kingdom.

On September 26th 1960 The British Aviation Minister, Peter Thorneycroft, arrived in Ottawa to solicit Canada's support.[1] The Diefenbaker government reversed their position of a year earlier and made it known that they were not interested in participating in a Commonwealth space program.[2]

With the Bomarc issue still hanging in the air Canada's government expressed little interest in telling the Canadian public that they might be considering financing yet another missile program, regardless of what it was for; especially since they had already committed to Black Brant. This was clearly the moment when the plans for a Commonwealth space program died. 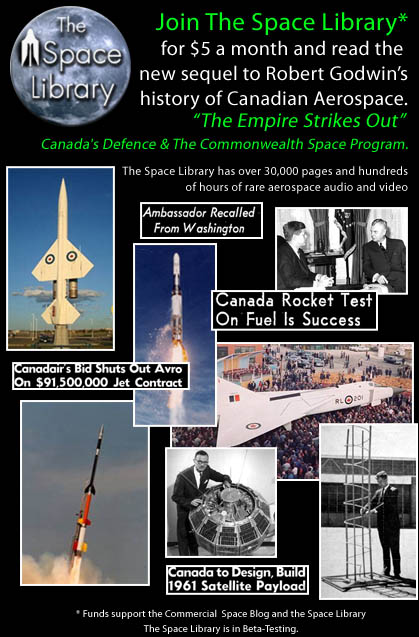 In some respects this was one of the critical moments when Britain ceased to be the mother of Empire and reluctantly became part of Europe. The choices remaining to Westminster were to concede space to the USA and the Soviet Union, or make a deal with Germany and France.

In early 1961 discussions continued briefly between Canada, Britain, Belgium, Denmark, Germany, Italy, Holland, Norway and Switzerland for a joint Commonwealth/Europe space launcher. Delegates from these countries were taken to see the Blue Streak facilities but the Canadian government, when it was paying any attention to space at all, would continue to look at the bigger opportunity offered by its southern neighbor. Rather than commit to a Commonwealth/ European space program Canada's government chose to sit on the sidelines with observer status.

Now resettled in England James C. Floyd was leading a team at Hawker Siddeley to design a solar powered communications satellite to be launched by Blue Streak or the newly proposed European launcher...

Last Week: "BOMARC; the Blue Streak; the Blue Steel or the Douglas Skybolt and Woomera," in part six of "The Empire Strikes Out - Canada's Defence & The Commonwealth Space Program."

Next Week: "The Diefenbaker Government Collapses," as part eight of "The Empire Strikes Out - Canada's Defence & The Commonwealth Space Program" continues!
Posted by Chuck Black