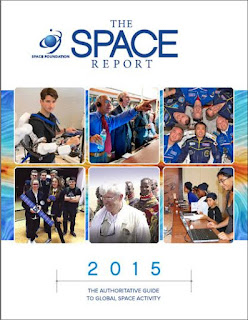 After years of steady, respectable growth hovering around 7% per annum, the global space industry appears to be on the cusp of a new era of rapid expansion in both capabilities and customers. At least those are the conclusions embedded within The Space Report 2015: The Authoritative Guide to Global Space Activity.

The eighty five page report, prepared by the Colorado Springs, CO based Space Foundation (a nonprofit organization that advocates for the global space industry) with input from the not-for-profit European trade association Eurospace, was released earlier this month.

Commercial space activities such as telecommunications and Earth imaging made up approximately 76% of the total.

From 2005 - 2014, the industry as a whole demonstrated a compound annual growth rate (CAGR) of 7%, nearly doubling in size over the course of the decade.


The report noted that the global space industry was attracting new customers just learning to make use of space assets like satellite imagery to enhance their businesses. Some of these industries provide communication and lifestyle products and services that a rapidly growing number of people use in their day-to-day lives.

The report even went into detail concerning the benefits of using space assets to deliver products and services to government organizations, private commercial companies, industry, law enforcement and public education organizations. Given that the report was compiled by two space advocacy organizations, this seems like a perfectly reasonable addendum to the main report.


Other highlights of the report include:

Although the data is skewed toward the United States, The Space Report 2015: The Authoritative Guide to Global Space Activity offers a good overview of the world’s growing space economy.

The report, and the additional data available by subscription, can be a useful addition to an organization’s short and long-term planning.