The 2014 Canadian Aerospace Summit, focused around the topic of "One World; Delivering Results in a World Market" and organized by the Aerospace Industries Association of Canada (AIAC), will be held at the Ottawa Convention Centre in Ottawa, Ontario from November 18th - 19th.


From a space focused perspective,  the important event is a panel discussion on the utilization and exploration of space moderated by Iain Christie, the executive vice president of AIAC, but also including William Gerstenmaier, the  associate administrator for human exploration and operations for NASA and Gilles Leclerc, the director general of space exploration for the Canadian Space Agency (CSA).

But from a business perspective, there is also a variety of fascinating speakers such as Aviation Week editor in chief Joe Anselmo moderating a panel on the topic of "Industry Trends: Where are We Headed," with Kevin Michaels,  the global managing editor of aviation consulting and services at ICF International and Ronald Epstein, the managing director of aerospace and defence for Bank of America, Merrill Lynch Global Research. 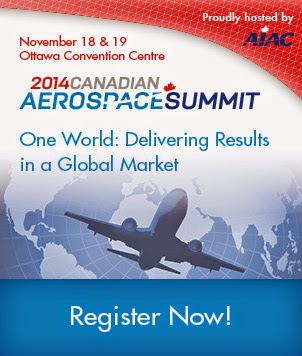 Also presenting will be the honorable Diane Finley, the Federal minister of public works and government services, Dennis Foubert, the president and CEO of the Consortium of Aerospace Research and Innovation in Canada (CARIC), plus quite a number of others.

It's certainly a useful event and well worth attending. To learn more check out the Canadian Aerospace Summit website at http://www.aerospacesummit.ca/en/.
Posted by Chuck Black