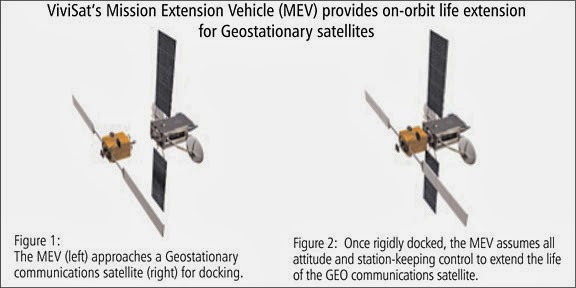 But details of the "final financing" to fund the missions are still to be settled, according to the article, which quoted both Vivisat CEO Craig Weston and COO Bryan McGuirk.

As outlined in the January 13th, 2011 Vivisat press release "ViviSat Launched - New Venture Will Provide Satellite Life Extension Services," as posted on the Spaceref.com website, the plan uses a Mission Extension Vehicle (MEV) to dock permanently to an orbiting satellite and take over operations from the original propulsion system.

The methodology is generally considered less complex than others, such as BC based MacDonald Dettwiler (MDA), which, as outlined in the February 19th, 2012 post "Details of MDA On-Orbit Satellite Servicing Proposal," is designed with the capability to refuel multiple satellites from a single vehicle.

Of course, as outlined in the April 3rd, 2011 blog post "A Backgrounder for On-Orbit Satellite Servicing," the concept of orbital satellite refueling and repair has been around for almost as long as the modern space age with the strongest proponents always poised to move forward almost immediately.

Lets see how this latest announcement stands the test of time.
Posted by Chuck Black