The David Emerson led Federal Review of Aerospace and Space Programs and Policies (usually referred to as either the "Aerospace Review Report" or the "Emerson Report") has just achieved its first two unequivocal victories for the aviation industry.

But the review has so far been much less successful in its attempt to get the Federal government to address the concerns of the $3.5 Bln per year Canadian space industry or to address the ongoing structural and procurement issues which were uncovered by Emerson within the Canadian Space Agency (CSA) as reported in the December 5th, 2012 blog post "What the Space Volume of the Aerospace Review Actually Says."

Of course, the big wins for the aviation industry are easy enough to find. They're funded line items included within the March 21st, 2013 Federal budget.

The first is a 20% increase in funding over the next five years for the Strategic Aerospace and Defence Initiative (SADI).


... was launched in 2007 to fund research and innovation initiatives and research collaborations. Since then, more than $800 million has been committed to new initiatives.

The budget extends SADI funding over the next five years with another $1 billion, while acknowledging that the program will undergo a number of changes recommended by the Emerson Aerospace Review to make it more effective, including better integration of post-secondary institutions in research collaborations.

As outlined in the March 21st, 2013 SpaceRef.ca article "Budget 2013 - Space Sector: Please Hold a Little Longer," the government "did include mention of companies who had received (previous SADI) funding but they were all in the aero part of the aerospace sector."

The second Emerson win is the new Aerospace Technology Demonstration Program (ATDP), which has been allocated $110Mln CDN over four years beginning in 2014-2015.

According to the budget, this new program will "support large-scale technology projects that exhibit strong commercialization potential and promote cross-industry collaboration, including simulation trials, systems integration testing and refinement activities." The ATDP program is essentially identical to recommendation #3 on page 12 of the first volume of the two volume Emerson Report ("Beyond the Horizon: Canada's Interests and Future in Aerospace") which recommended that the Federal government "create a program to support large scale aerospace technology demonstration."

A portion of the funding for ATDP (up to $20Mln per year) will come from SADI, while the remainder is expected to be new funding. It is also expected that, while Canadian space companies could certainly apply to the ATDP program, there is no specific incentive for them to do so and the majority of applicants will be large aviation companies like Montreal based Bombardier. 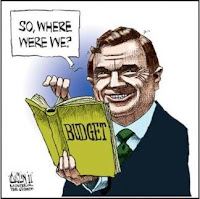 But while the aviation industry came in for the lions share of the increased funding, the budget did at least mention the Canadian space industry. It stated that the governments intention is to focus on:


... developing a series of strategic plans outlining the Government's space priorities over the short, medium and long term; establishing a Canadian Space Advisory Council to advise the Government on the development of these plans; stabilizing the budget of the Canadian Space Agency over the next 10 years and establishing cost-sharing models to support the development of new space projects; and implementing measures to expand the level of space-related commercial activity in Canada.

Of course, the aviation sector of the aerospace industry already understands that actions speak louder than words and the government has acted accordingly with the new funding for the SADI and ATDP programs.

Hopefully the space side of the aerospace industry will figure out the same over the next little while and will then follow down a similar path.