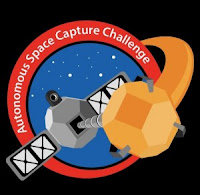 However, the body of the press release describes the latest round of an ongoing international competition that Canadian educational facilities, especially those with expertise related to the MacDonald Dettwiler (MDA) on-orbit satellite servicing program, might just want to register for.

According to the press release, the Defense Advanced Research Projects Agency (DARPA), in co-operation with Zero Robotics (created in 2009 by the Massachusetts Institute of Technology Space Systems Laboratory to open up the International Space Station to research opportunities originating from secondary school students) and the National Aeronautics and Space Administration (NASA), have announced the opening of registration for the 2012 Autonomous Space Capture Challenge, a contest focused almost entirely on developing computer algorithms to control and model autonomous orbital docking and satellite servicing procedures.

And this is where it gets interesting.

In essence, the intent of the program is to develop software designed to enable a servicing satellite to capture a tumbling spacecraft using algorithms which would be very similar to those needed for the proposed on-orbit satellite servicing program that MDA has been promoting and hoping to sell to DARPA.

As outlined in my November 2nd, 2011 post "Will US Allow Canada to Bid On-Orbit Satellite Servicing Contracts," MDA is currently awaiting a DARPA decision on whether the Canadian company will be allowed to bid on upcoming US government contracts relating to on-orbit satellite servicing.

But to be fair, the primary MDA focus is on the hardware while the DARPA competition focuses exclusively on software required to control the docking process, which can essentially be developed by anyone with a computer (even high school students).

The press release goes on to state that:


Competitors in the Autonomous Space Capture Challenge will be tasked with programming an active satellite or "Tender" to synchronize its motion with and capture a tumbling, passive space object or "POD". The tournament will have four week-long rounds, during which teams will test their solutions and submit them for scoring and publication on the leader board. At the end of each week the best submission will be published on the Zero Robotics website for public reference and use in the next round. The winner from each week will be included in a demonstration aboard the ISS in late May with the best performing finalist being awarded an additional commendation.

The 2012 competition begins on March 28th, 2012 and submissions will be accepted through the month of April.

Testing of these algorithms will take place as part of the SPHERES (Synchronized Position Hold Engage and Reorient Experimental Satellites) laboratory environment to provide DARPA, NASA, and others with a long term testbed for the validation of the formation flight and autonomous docking and rendezvous algorithms needed for future satellite servicing missions.

It's surprising that Canadian educational facilities haven't already been encouraged by MDA and the Canadian Space Agency (CSA) to register for this international contest and show DARPA what Canuck's are truly capable of.

Hopefully, this oversight will soon be rectified.
Posted by Chuck Black