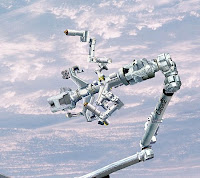 Its audio track still hasn't been posted on the MDA website, but the Wednesday, October 27th,  Macdonald Dettwiler (MDA) third quarter conference call did occur as planned and certainly seemed full of surprises.

The biggest surprise on the call, according to the October 28th, 2010 Space News article "Robotics Business Clouds Otherwise Bright Outlook at MDA," is that the company shows strong growth right across all business units with the single exception of space robotics. According to the article:


With the coming retirement of the U.S. space shuttle and its Canadarm, MDA’s space-robotics business, one of the company’s signature product lines, will drop unless it lands a customer for its proposed satellite in-orbit servicing project...
Without a satellite-servicing contract or some other new work, MDA’s space robotics business will have to shrink in 2011 once Canadian economic-stimulus funds run out, despite the expected extension of the international space station’s operations to 2020, (MDA CEO Daniel E.) Friedmann said.

These statements seem to fly in the face of recent public comments by members of the Canadian Space Agency (CSA) indicating that commercial robotics sales derived from space activities are a highly profitable and growing business.

The Space News article then goes on to further quote MDA CEO Friedmann as stating:


The mainstay of the division is to develop new technology for space and at the moment, Canada has not come up with anything there. Without the government taking some leadership in robotics, we’ve got a problem. We’re going to shrink there next year, and we’re going to have some layoffs.

The conference call also came only one day after Christian Sallaberger, VP and Director of Space Exploration at MDA was quoted in the Hill Times policy briefing on aerospace as stating that "it’s the time to make sure that we’re not missing the boat of the next phase of space exploration” and caps a week of speculation that MDA is considering selling "all or part of the company" as outlined in my October 22nd, 2010 post "Unattributed Statements, Denials, Counter Claims and the Upcoming Conference Call." 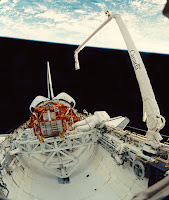 Of course, threatening to sell portions of MDA brings back memories of 2008, when the company announced that it was selling it's space focused business to US firm Alliant Techsystems (ATK).

That sale was eventually blocked by the federal government of a variety of national security and domestic reasons and no one seems to want to go through the process again. But the current rumors, coupled with the recent statements of MDA executives do seem designed to encourage "something" to happen.

Perhaps that something is related to the CSA budget which MDA uses to fund their robotics research. According to the Hill Times article, the CSA core budget remains stable at $300-million a year which funds existing programs. 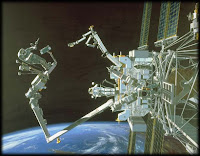 However, new programs are either funded through an additional package with $397-million allocated over five years specifically for earth observation satellites (which already mostly goes to MDA for the Radarsat program) or through a second, $110 million economic stimulus package intended to support new space exploration technologies, the next generation Canadarm and pretty much everything else that isn't already funded.

This existing $110 million economic stimulus package will also end in March 2011 and it is not expected that the federal government will allocate additional funds to extend the program. This is also where future funding for an MDA derived satellite in-orbit servicing project would likely need to come from.

But it won't, unless new funding is allocated by the federal government.

It's possible that MDA executives have begun a semi-public lobbying effort designed to encourage the federal government to allocate further funds for MDA's newest project.

If this is true, then I guess the robotics wars have begun.
Posted by Chuck Black